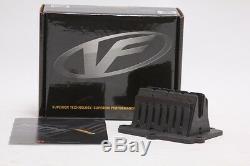 2 Because the reed petals only need to travel half the distance of that on a conventional reed valve design, there is a greater chance of them being fully opened as well as a better chance of sealing when they are "closed". A reed petal never truly "closes" in a classic sense, as it is always in movement. Consider this, an engine operating at 8,000 RPM results in a reed petal opening and closing 133 times in one second. This fact sheds light on another VForce advantage. Since the petals are only traveling half the distance, they generally last longer and they receive less wear than the reed petals on a conventional reed valve design.