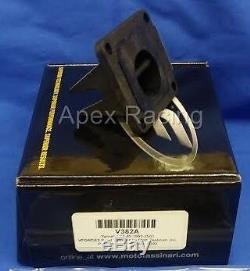 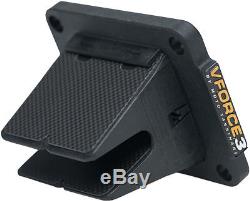 If you've ever checked your reed petals for wear (which you should be doing once a year) than you can install a VForce3 Reed Valve System. The VForce3 Reed Valve System incorporates features you won't find with other system on the market. With such features as twice the reed tip surface, radius cage surface, snap-together construction, proprietary carbon fiber recipes and more. By doubling the reed tip surface the petals now only need to open half as far to have the same flow as a stock style cage. This is a significant advantage when you factor in that a reed petal opens and closes 133 times per second at 8,000 rpm. The petals are only traveling half the distance of a stock style cage, so now fatigue to the petal has been greatly reduced, increasing petal life. This design also enables the valve to drastically improve the entire powerband with a significant boost in the bottom and mid. Instant throttle response is an understatement! The petals now sit on a radius surface to create a "pre-loading" effect that improves an already snappy acceleration. Our new cage design now allows the reed petal tips to be recessed into the cage itself. This allows for a cushioning of the reed tips and also discourages the possibility of any back-flow.

Below is a list of the top features of the VForce3. TWICE THE REED TIP SURFACE.

The unique and proven design of the VForce3 Reed Valve System doubles the available reed tip surface over a conventional reed valve design. By doubling the effective reed tip surface it enables the engine to get more air with less effort. The number one rule in two-stroke motor modification is More Air = More Horsepower. Help your engine get the maximum airflow for maximum horsepower. One of the main factors in the incredible popularity of the VForce3 Reed Valve System is the horsepower gains. The VForce design widens peak power and increases the horsepower over the entire range of the powerband. These results are readily seen on the dyno and can also be felt "seat-of-the-pants". A direct result of the increased efficiency of the VForce3 design is increased acceleration. Enjoy razor like throttle response when blasting out of a snocross turn or shredding a loamy berm, in the way only VForce technology can deliver.

The new reed cage design on the VForce3 Reed Valve system incorporates airfoil shaped (flat on bottom/curved on top) reed tip surfaces which in turn increases the velocity of the fuel/air mixture as it passes through and over, creating the optimum fuel atomization. Moto Tassinari continues to test and develop new "recipes" for our carbon fiber used in the VForce3 Reed Valve system. The VForce3 now uses symmetrical reed petals for both the inner and outer red petals.

No longer will you need to be concerned with having both inner and outer reed petals when it comes time to replace reeds. Another advantage of this design is that some heavily modified motors may be harsh on only the bottom reed petal, which may result in accelerated wear on that single petal.

The VForce3 Reed Valve System incorporates the industrys first and only patented snap together reed valve design. The entire assembly is completely screw free, meaning that when reed petals need changing the job is now literally a SNAP. Replacing the reed petals may be a chore on stock or other reed valve designs, however on the VForce3 the job literally takes 2 minutes or less, meaning less downtime and more time for what matters - riding. Custom air guides specific to each individual application ensure the maximum airflow and performance benefits of the VForce3 reed valve system in your motor. Don't settle for a generic design when you can have a custom tailored VForce3 Reed Valve System for your application. Check out are other listings for, hotcams cams, big bore kits, cranks, pistons, exhaust and may other of your ATV and bike needs. Sellers: Get your own map of past buyers.